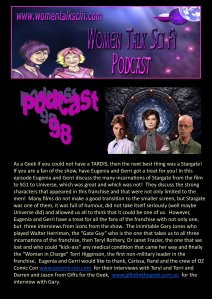 As a Geek if you could not have a TARDIS, then the next best thing was a Stargate! If you are a fan of the show, have Eugenia and Gerri got a treat for you! In this episode Eugenia and Gerri discuss the many incarnations of Stargate from the film to SG1 to Universe, which was great and which was not! They discuss the strong characters that appeared in this franchise and that were not only limited to the men! Many films do not make a good transition to the smaller screen, but Stargate was one of them, it was full of humour, did not take itself seriously (well maybe Universe did) and allowed us all to think that it could be one of us. However, Eugenia and Gerri have a treat for all the fans of the franchise with not only one, but three interviews from icons from the show. The inimitable Gary Jones who played Walter Herriman, the “Gate Guy” who is the one that takes us to all three incarnations of the franchise, then Teryl Rothery, Dr Janet Frazier, the one that we lost and who could “kick-ass” any medical condition that came her way and finally the “Woman in Charge” Torri Higginson, the first non-military leader in the franchise. Eugenia and Gerri would like to thank, Carissa, Rand and the crew of OZ Comic Con http://www.ozcomiccon.com for their interviews with Teryl and Torri and Darren and Jason from Gifts for the Geek, http://www.giftsforthegeek.com.au for the interview with Gary.<a href=”http://womentalkscifi.com/podcasts/

In this podcast Gerri and Eugenia have not one but two interviews from one of their favourite shows Stargate Atlantis. They are none other than David Nykl who played Dr Radek Zelenka and the ‘Chucknician’ himself Chuck Campbell. Stargate Atlantis has not lost its charm and continues to be watched my millions all over the world. Was its run cut too short, could it have lasted a few more seasons? Listen to Gerri and Eugenia give their opinions about the show and their thoughts about the characters Zelenka and Chuck the Technician. In David Nykl’s interview you will find out about the many things David has been involved in from directing to co-founding a theatre company in the Czech Republic. In Chuck’s interview find out how he got his name in the series. They give their thanks to Gifts for the Geek http://www.giftsforthegeek.com.au and The Hub Productions http://www.thehubproductions.com and for the opportunity to interview David and Chuck.

Eugenia and Gerri discuss the many years of entertainment that Stargate has given them over the years, talking about  Stargate SG1, Stargate Atlantis and of course the youngster of the crew, Stargate Universe. This favoured show still resonates today with Sci Fi fans with its strong story lines and believable plots (well to us that wish that we could go through the gate!) and its Doctor Who ability to have major cast changes and still be relevant. The characters grew over the years (some even growing their hair) and with the use of Egyptian mythology set the show in a place that gave us familiarity whilst taking us to new worlds. In this episode Eugenia and Gerri talk to not one but two of the shows actors that made an impact Christopher Judge and Corin Nemec, the one that grew his hair and the one that was swapped for Daniel! Thanks to Carissa and Rand from The Hub Productions http://www.thehubproductions.com and Gift for the Geeks at Supanova Expo http://www.giftsforthegeek.com.au

Gerri and Eugenia interview Colin Cunningham at Adelaide Armageddon Expo http://www.armageddonexpo.com just before the television series Falling Skies aired. Colin talks about the change from the smart military character of Major Davis on Stargate SG-1 to scruffy con man John Pope on Falling Skies. Colin explains how acting in Stargate changed his life and his excitement about working on the new series. Listen to what Gerri and Eugenia think about the show, the story line and development of the characters. Do you agree with Gerri’s theory about the aliens?

Episode 19 – Through the Stargate to Atlantis

In this podcast Gerri and Eugenia are joined by their two good friends Marlene and Sarah. So what are they talking about? Well, they decided to get together to talk about Stargate Atlantis which is Sarah’s favourite show. So did they just talk about the show or did it turn into a discussion about one friend’s obsession with a character from this show! Who do you think this may be well to give you a hint his name begins with an M? So have a listen and see if you can tell which of us is the one with the obsession and find out how he (oops that is another clue) talks about how he got his role in Stargate Atlantis. Keep listening to our upcoming podcasts and you will be able to listen to him talk about his time on the show.

With both Star Gates off the air Gerri and Eugenia were looking forward to Universe. Having seen the promos they wonder if it could be a version of Battle Stargate Voyager? They so wished that it could stand alone! What do they think of the new series? What do they think has influenced the creators of the show, did they warm to the characters or like the story line?  Download this episode and see if they nailed it? 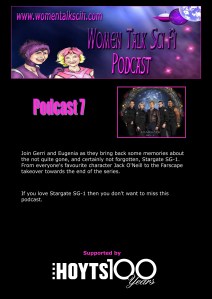 Join Gerri and Eugenia as they bring back some memories about the not quite gone, and certainly not forgotten, in this episode they discuss Stargate SG-1.  From everyone’s favourite character Jack O’Neill to the Farscape takeover with Ben Browder and Claudia Black towards the end of the series.  If you love Stargate SG-1 then you don’t want to miss this podcast.