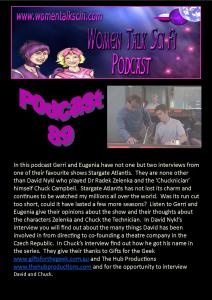 In this podcast Gerri and Eugenia have not one but two interviews from one of their favourite shows Stargate Atlantis. They are none other than David Nykl who played Dr Radek Zelenka and the ‘Chucknician’ himself Chuck Campbell. Stargate Atlantis has not lost its charm and continues to be watched my millions all over the world. Was its run cut too short, could it have lasted a few more seasons? Listen to Gerri and Eugenia give their opinions about the show and their thoughts about the characters Zelenka and Chuck the Technician. In David Nykl’s interview you will find out about the many things David has been involved in from directing to co-founding a theatre company in the Czech Republic. In Chuck’s interview find out how he got his name in the series. They give their thanks to Gifts for the Geek http://www.giftsforthegeek.com.au and The Hub Productions http://www.thehubproductions.com and for the opportunity to interview David and Chuck.