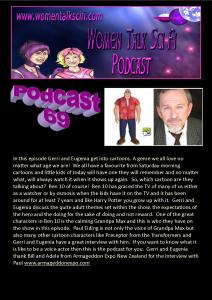 In this episode Gerri and Eugenia get into cartoons. A genre we all love no matter what age we are! We all have a favourite from Saturday morning cartoons and little kids of today will have one they will remember and no matter what, will always watch it when it shows up again. So, which cartoon are they talking about? Ben 10 of course! Ben 10 has graced the TV of many of us either as a watcher or by osmosis when the kids have it on the TV and it has been around for at least 7 years and like Harry Potter you grow up with it. Gerri and Eugenia discuss the quite adult themes set within the show, the expectations of the hero and the doing for the sake of doing and not reward. One of the great characters in Ben 10 is the calming Grandpa Max and this is who they have on the show in this episode. Paul Eiding is not only the voice of Grandpa Max but also many other cartoon characters like Preceptor from the Transformers and Gerri and Eugenia have a great interview with him. If you want to know what it is like to be a voice actor then this is the podcast for you. Gerri and Eugenia thank Bill and Adele from Armageddon Expo New Zealand for the interview with Paul http://www.armageddonexpo.com

Gerri and Eugenia talk about robots, mechanoids, androids and the odd dalek or two. They look at the history of the machine man/woman from the first one to be seen in Sci Fi feature films, who of course as we all know is Maria in the newly released and remastered, Metropolis from http://www.madman.com.au. So why are they so interested in the manmade machine in the human form? It is because they have an interview with one of the genres most loved character actors, the engaging and fascinating Brent Spiner the man who made us all want to be a machine! Brent Spiner played the android Data in Star Trek Next Generation and Star Trek movies. He has also been in Threshold, Independence Day, Star Trek Enterprise and is now writing and performing his own webseries called Fresh Hell. Gerri and Eugenia’s thanks go to Scott and Diana Liston from First Contact Conventions http://www.firstcontactconventions.com.au

Episode 24 – Star Trek Aliens – An Interview with Rene and Ethan

When Rene Auberjonois and Ethan Philips get together, laughter is the order of the day. In this podcast Gerri and Eugenia discuss the characters of Odo from Star Trek: DS9 and Neelix from Star Trek: Voyager, and the impact the characters had. Then it is on to one of the funniest interviews they have recorded so far. They caught up with Rene and Ethan at The Hub Productions
http://www.thehubproductions.com Convention in Adelaide this year. Special thanks to Carissa, Rand and The Hub Team for the interview.

In this their 21st podcast (They now have the keys to the recording room!) Gerri and Eugenia finally have an all “Women Talk Sci FI” podcast! At The Hub Productions Star Trek Convention in Adelaide, a convention for which they did not have to travel they had the opportunity to interview Denise Crosby their first female actor interview. Although Denise was only in the series as a regular for one season Eugenia and Gerri discuss the impact her character had on the show and how in her portrayal of Tasha Yar Denise made it easy to imagine that women who were capable could be responsible for the security of a great big ship. Tasha Yar was never forgotten throughout the 7 seasons of TNG and Denise in her portrayal of the alternate Tasha and her daughter Sela ensured that. Denise is also famous for “Trekkies” and “Trekkies Two” great documentaries on the world of Star Trek Fandom. Gerri and Eugenia asked all the questions that fans would if they had the opportunity to sit down and chat with Denise. Thank you to Carissa and Rand and crew from The Hub Productions http://www.thehubproductions.com for the opportunity to interview Denise, we recommend you check them out because there are great conventions coming to a city in Oz near you! 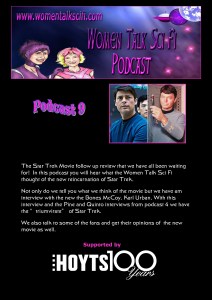 The Star Trek Movie follow up review that we have all been waiting for! In this podcast you will hear what the Women Talk Sci Fi thought of the new reincarnation of Star Trek. Not only do they tell you what they think of the movie but they have an interview with the new Bones McCoy, Karl Urban. With this interview and the Pine and Quinto interviews from podcast 4 they have the “triumvirate” of Star Trek. They also talk to some of the fans and get their opinions of the new movie as well. They wish to thank Supanova http://www.supanova.com.au for the wonderful interview.

It’s not long now and the all new Star Trek movie will be in cinemas for your viewing pleasure. Which means this is the last Star Trek related episode on Women Talk Sci Fi for a while. Well at least until they do a review of the new movie itself. Prepare to put you thinking caps on and join Gerri and Eugenia on a journey down memory lane. It got me thinking about my first Star Trek experience. I was never an original series person and my most prominent memories of early Star Trek is from The Next Generation.  However if I really dig deep the occasional memory of The Animated Series sticks its head up to say hello.  Still my fondest memories are for the cast of The Next Generation and it will be interesting to see my reaction to the re-imagined Original Series crew. Yet again we get another big name interview in this episode. This time none other than John Cho of Harold and Kumar fame. From what I have heard about his portrayal of Hakaru Sulu the image of G.I. Joe meets
Trek pops to mind. Finally Sulu truly gets an opportunity to dirty his hands with some real action. Something that I am sure George Takei wished he got the opportunity to do during his time as Sulu. At last we also get an actor who was willing to admit he was into Star Trek before starring in the movie. He was only a casual fan but that’s better than nothing. Seeing Sulu in such an important role during that era meant a lot to John Cho. So much so that he was desperate to be a part of this rebirth of Star Trek. So sit back and join Gerri, Eugenia and Marlene as they chat with the new incarnation of one of Star Trek favourite characters.

What more could a Trekkie ask for than an interview with Kirk and Spock at the same time. Well that is exactly what happens in episode four of Women Talk Sci Fi. There are three things which spring to mind when listening to Chris Pine and Zachary Quinto.  Their dedication to their craft, the respect they have for those that have come before them and their great sense of humour.  Just like J.J. Abrams neither of these great actors claim to have been Trekkies when they accepted their new identities. It seems to be a recurring theme that may be distressing for many Star Trek fans. However they also share something else in common that alleviates that concern. That is a respect for both the characters they are playing and the fans that have come to love Star Trek. Without that respect a lot of damage could of been done to the beloved Star Trek franchise. That respect coupled with not being encumbered by expectations allows them to breathe new life into Star Trek. The humour that is on display in the interview is another promising glimpse into the new movie. Star Trek was always at its best when it didn’t take itself too seriously and had a good laugh at its own expense. J.J. Abrams certainly seems to have surrounded himself with a group of actors who desperately want to bring something of themselves to their characters whilst trying to remain true to the originals. This is an attitude that cannot be missed when listening to Chris Pine and Zachary Quinto talk about their experiences making this movie. It’s not all serious talk though and the two actors certainly have a few interesting stories to tell. So join Gerri, Eugenia and guest presenter Marlene with their round table interview with Chris Pine and Zachary Quinto.

The clock is ticking until the public release of the born again Star Trek movie. So Gerri and Eugenia are madly trying to cram everything in before the big event. So you guessed it this is another Star Trek podcast. What a cool podcast it is though with none other than J.J. Abrams as the main focus of today’s podcast. It isn’t just all interviews with the rich and famous though. You get to spend a day in the life of a podcast reporter. Find out what really happens behind the scenes of the media frenzy. The core of this podcast is the J.J. Abrams interview though. He seems to be a very level headed man with a passion for good stories. It doesn’t matter if it is Star Trek or not just that the story evokes an emotional response. Some of you might cry that nothing is more important than Star Trek. I believe though that J.J Abrams has really grasped what Gene Roddenberry envisioned for Star Trek. It’s not a show for flashy special effects and cool gadgets. It’s a platform designed to tell you a story. One with meaning, filled with optimism and hope for the future. Whilst J.J. Abrams freely admits he was not a Star Trek fan when he started this project he also freely admits that the Roddenberry vision has roped him in. Star Trek will do that to anyone who wants to desperately believe that humanity will ultimately make it. In J.J. Abrams one words that very optimism that has made Trekkie’s so uncool is set for a reversal. Optimism and hop is the new black. It’s not all about J.J Abrams though. There is also a red carpet interview with producer Bryan Burke. Over all this is a great podcast especially for those interested in the people who work behind the cameras.

Episode 02 – I’ve Got a Golden Ticket 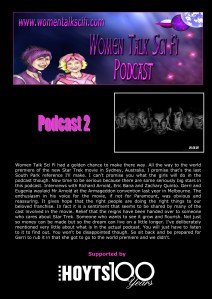 Women Talk Sci Fi had a golden chance to make there way. All the way to the world premiere of the new Star Trek movie in Sydney, Australia. I promise that’s the last South Park reference I’ll make. I can’t promise you what the girls will do in the podcast though. Now time to be serious because there are some seriously big stars in this podcast. Interviews with Richard Arnold, Eric Bana and Zachary Quinto. Gerri and Eugenia waylaid Mr Arnold at the Armageddon convention last year in Melbourne. The enthusiasm in his voice for the movie, if not for Paramount, was obvious and reassuring. It gives hope that the right people are doing the right things to our beloved franchise. In fact it is a sentiment that seems to be shared by many of the cast involved in the movie. Relief that the reigns have been handed over to someone who cares about Star Trek. Someone who wants to see it grow and flourish. Not just so money can be made but so the dream can live on a little longer. I’ve deliberately mentioned very little about what is in the actual podcast. You will just have to listen to it to find out. You won’t be disappointed though. So sit back and be prepared for Gerri to rub it in that she got to go to the world premiere and we didn’t.