Star Trek is just one of those shows that keeps on giving and in this episode that is what Eugenia and Gerri are doing for you. The cast members who they talk to in this episode are from Star Trek:TNG, Star Trek:DS9 and Star Trek:Voyager. They talk with Tony Todd who played both Kurn and the older Jake Sisko as well as other characters across the franchise. Patricia Tallman not only played roles in the three series, but was also the stunt double for Nana Visitor, and Gates McFadden and other guest stars on the shows. Then they get to talk with Daniel Davis not only known for his role as Niles in The Nanny, but also for his role as Moriarty in Star Trek:TNG although only appearing in two episodes he made his presence lasting. Next is Nicole de Boer, who took on the role of Dax on Star Trek:DS9 playing a role that had her dealing not only with the memories of Jadzia Dax, but also another 7 lives. Eugenia and Gerri would like to thank the following, Daniel and Lionel from www.supanova.com.au and www.lionelmidfordpublicity.com for their interview with Tony Todd. Armageddon Expo www.armageddonexpo.com for Patricia Tallman and Scott Liston of First Contact Conventions for both Daniel and Nicole. Find him at www.firstcontactconventions.com.au

For over 50 years Doctor Who has graced TV and Movie screens all over the world. It has not only brought us great stories, but also iconic characters who not only contributed at the time, but continue to do so in the Whoniverse. In this episode Gerri and Eugenia talk with some of those iconic actors who travelled in the T.A.R.D.I.S. Including, Geoffrey Beevers who played that “oh so evil” character The Master and the indomitable John Levene who played the role of Sgt Benson of UNIT. Gerri and Eugenia would like to thank Scott Liston of First Contact Conventions for allowing them interview time with these interesting people. Find them at www.firstcontactconventions.com.au Along with these characters from Classic Who Gerri & Eugenia speak to newer icons from the Whoniverse including Catrin Stewart who portrayed the feisty Victorian Jenny Flint. Thanks go to OZ Comic Con www.ozcomiccon.com  Last, but not least Pearl Mackie who brought us the irrepressible Bill Potts and who always wanted to live more. Thanks to Daniel of Supanova and Lionel of Lionel Midford Publicity, catch them at www.supanova.com.au and www.lionelmidfordpublicity.com

Episode 138 – What a Whovian Can Do – Gary Russell 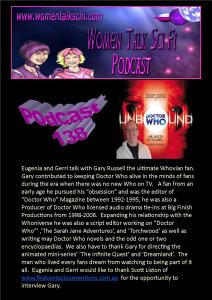 Eugenia and Gerri talk with Gary Russell the ultimate Whovian fan. Gary contributed to keeping Doctor Who alive in the minds of fans during the era when there was no new Who on TV. A fan from an early age he pursued his “obsession” and was the editor of “Doctor Who” Magazine between 1992-1995, he was also a Producer of Doctor Who licensed audio drama tie-ins at Big Finish Productions from 1998-2006. Expanding his relationship with the Whoniverse he was also a script editor working on “Doctor Who”’ ,‘The Sarah Jane Adventures’, and ‘Torchwood’ as well as writing may Doctor Who novels and the odd one or two encyclopaedias. We also have to thank Gary for directing the animated mini-series’ ‘The Infinite Quest’ and ‘Dreamland’. The man who lived every fans dream from watching to being part of it all. Eugenia and Gerri would like to thank Scott Liston of
www.firstcontactconventions.com.au for the opportunity to interview Gary. 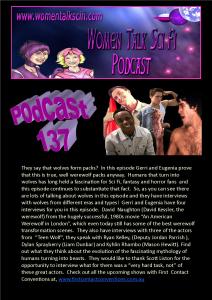 They say that wolves form packs? In this episode Gerri and Eugenia prove that this is true, well werewolf packs anyway. Humans that turn into wolves has long held a fascination for Sci Fi, fantasy and horror fans and this episode continues to substantiate that fact. So, as you can see there are lots of talking about wolves in this episode and they have interviews with wolves from different eras and types! Gerri and Eugenia have four interviews for you in this episode. David Naughton (David Kessler, the werewolf) from the hugely successful, 1980s movie “An American Werewolf in London”, which even today still has some of the best werewolf transformation scenes. They also have interviews with three of the actors from “Teen Wolf”, they speak with Ryan Kelley, (Deputy Jordan Parrish), Dylan Sprayberry (Liam Dunbar) and Kyhlin Rhambo (Mason Hewitt). Find out what they think about the evolution of the fascinating mythology of humans turning into beasts. They would like to thank Scott Liston for the opportunity to interview what for them was a “very hard task, not” of these great actors. Check out all the upcoming shows with First Contact Conventions at, www.firstcontactconventions.com.au

UK TV has some shows that never really grow old they just keep on giving. One of these is the iconic Sci Fi comedy Red Dwarf! In this episode Eugenia and Gerri talk to another of the cast. The smartest and dumbest computer on board the ship, (even the scutters are more intelligent than Holly on occasion) is who they are interviewing, the funny and sardonic Norman Lovett. But, as with any episode of Red Dwarf the unexpected can happen and that happened when they started interviewing Norman! In pops the redoubtable Craig Charles, who audio-bombed Norman, what happens next is a laugh fest where Eugenia and Gerri just sit back and let it happen! Eugenia and Gerri also talk all about the latest series’, yes, including Season 9 .
Don’t forget to catch up with their previous interviews with cast members including Cat (Danny John-Jules), Lister (Craig Charles), Kryten (Robert Llewellyn) and Captain Hollister (Mac McDonald). Eugenia and Gerri would like to thank Scott Liston of www.firstcontactconventions.com.au for the opportunity to interview Norman and Craig. 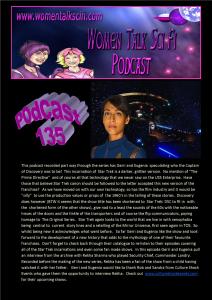 This podcast recorded part way through the series has Gerri and Eugenia speculating who the Captain of Discovery was to be! This incarnation of Star Trek is a darker, grittier version. No mention of “The Prime Directive” and of course all that technology that we never saw on the USS Enterprise. Have those that believe Star Trek canon should be followed to the letter accepted this new version of the franchise? As we have moved on with our own technology, so has the film industry and it would be “silly” to use the production values or props of the 1960’s in the telling of these stories. Discovery does however (BTW it seems that the show title has been shortened to Star Trek: DSC to fit in with the shortened form of the other shows), give nod to a least the sounds of the 60s with the noticeable hisses of the doors and the tinkle of the transporters and of course the flip communicators, paying homage to The Original Series. Star Trek again looks to the world that we live in with xenophobia being central to current story lines and a retelling of the Mirror Universe, first seen again in TOS. So whilst being new it acknowledges what went before. So far Gerri and Eugenia like the show and look forward to the development of a new history that adds to the mythology of one of their favourite franchises. Don’t forget to check back through their catalogue to re-listen to their episodes covering all of the Star Trek incarnations and even some fan made shows. In this episode Gerri and Eugenia pull an interview from the archive with Rekha Sharma who played Security Chief, Commander Landry. Recorded before the making of the new series, Rekha has been a fan of the show from a child having watched it with her father. Gerri and Eugenia would like to thank Rob and Sandra from Culture Shock Events who gave them the opportunity to interview Rekha. Check out www.cultureshockevents.com for their upcoming shows. 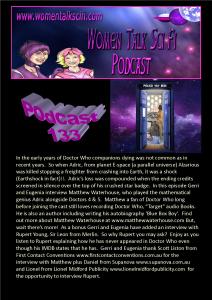 In the early years of Doctor Who companions dying was not common as in recent years. So when Adric, from planet E-space (a parallel universe) Alzarious was killed stopping a freighter from crashing into Earth, it was a shock (Earthshock in fact)!!. Adric’s loss was compounded when the ending credits screened in silence over the top of his crushed star badge. In this episode Gerri and Eugenia interview Matthew Waterhouse, who played the mathematical genius Adric alongside Doctors 4 & 5. Matthew a fan of Doctor Who long before joining the cast still loves recording Doctor Who, “Target” audio Books. He is also an author including writing his autobiography ‘Blue Box Boy’. Find out more about Matthew Waterhouse at www.matthewwaterhouse.com But, wait there’s more! As a bonus Gerri and Eugenia have added an interview with Rupert Young, Sir Leon from Merlin. So why Rupert you may ask? Enjoy as you listen to Rupert explaining how he has never appeared in Doctor Who even though his IMDB states that he has. Gerri and Eugenia thank Scott Liston from First Contact Conventions www.firstcontactconventions.com.au for the interview with Matthew plus Daniel from Supanova www.supanova.com.au and Lionel from Lionel Midford Publicity www.lionelmidfordpublicity.com for the opportunity to interview Rupert.