In recent times there is one series of books that got a generation of children to read and many adults as well. We really don’t need to tell you as you can see from the image on this podcast! Well, you are right it is ‘Harry Potter’! In this episode Gerri and Eugenia, discuss the books, the films, and much more. This book is of course an epic ‘heroes’it’s a tale, about good over evil, boy meets girl, a crime story, and of course inspirational! So who would not love it? Gerri and Eugenia talk about the fans who are very invested in this tale. There is fan-fiction, blogs, podcasts and even clubs all over the world. A generation of children grew up with Harry Potter and we mean then grew up around the same age and as Harry did so did they. The characters are strong and Hermione Grainger of course, is who every girl wanted to be. She was smart, the best at magic and was also prepared to make sure Harry did what he had to. The series of books is very reminiscent of the British boarding school books from the 40-60s and of course many people who would have gone to them appeared in the series. If you see an actor in another show, film, television and they are from the UK or Ireland then the probably have been in the movies. So Gerri and Eugenia are talking to two actors who played iconic roles in the series. Firstly, Robbie Jarvis who played James Potter in some of the early backstory. Their other interview is with Stansilav Yaneviski, that enigmatic Quidditch player Viktor Krum, who once tried to win Hermione’s heart.

Gerri and Eugenia would like to thank Oz Comic Con www.ozcomiccon.com and Sophie Blue of Blue Planet PR www.blueplanetpr.com.au for offering them the opportunity to interview Robbie.

Gerri and Eugenia would also like to thank Daniel from Supanova www.supanova.com.au and Lionel Midford www.lionelmidfordpublicity.com for offering them the opportunity to interview Stanislav.

Arrrrrh me hearties, and shiver me timbers , does that give you some clue as to what Eugenia and Gerri are talking about in this episode! Pirates are baddies that we love to love! So what is a “pirate”, and what do they have to do about Sci Fi and Fantasy well that’s what Gerri and Eugenia talk about! Pirates in spaceships include Firefly, Farscape and even some could say Doctor Who, well the odd episode or two! Eugenia and Gerri could not resist putting a picture of Johnny Depp on this podcast they unfortunately don’t have an interview with him, but they do have one with the “sane” and really the “rudder” and first mate of The Black Pearl , Joshamee Gibbs otherwise known as Kevin McNally. This actor who you will recognise from many a Sci Fi show talks about his obsession with “Tony Hancock”, his work as an actor who has managed to build a career across two continents and more! But let’s get back to pirates ! Captain Jack and Gibbs and their many cosplayer copies have turned pirates back into a watchable treasure. Eugenia and Gerri would like to thank Daniel and Lionel from Supanova Pop Culture Expo, for these interviews, catch them at www.supanova.com.au and www.lionelmidfordpublicity.com  and because they couldn’t resist : “Why are pirates pirates? Cuz they arrrrrr” LOL!!!

G.I. Joe has been around for a very long time and began the line of toys we now all call action figures. Many may not know that G.I. Joe was born to fight the dominance of Barbie.  The battle of the sexes wages on even in the world of toys. Now that G.I. Joe has beaten Barbie to the blockbuster movie prize has that war been won? I’m sure Barbie hasn’t given up yet and will continue her struggle against the usurper that is G.I. Joe. There is no doubt that G.I. Joe has had a big influence on how the toy market is made up today. Perhaps thought of as toys for boys only this is not necessarily the case. G.I. Joe is an equal opportunity toy with male and female characters of all races and creeds.  G.I. Joe is not just a toy though as there has been video game after game spanning two decades. There have been television cartoon shows and animated movies. Also a long lasting line of comic books. Now that G.I. Joe has made it to the big screen I am sure we can expect a new wave of toys, games, cartoons and comics to enjoy for years to come.  Now, if only I were a kid so I could enjoy all of this without getting those odd looks.  Don’t forget to visit GE News to see the photographs from the Sydney press conference.  Many thanks to George for going to the Sydney press conference and taking those fantastic photographs.

Join Gerri and Eugenia as they bring back some memories about the not quite gone, and certainly not forgotten, in this episode they discuss Stargate SG-1.  From everyone’s favourite character Jack O’Neill to the Farscape takeover with Ben Browder and Claudia Black towards the end of the series.  If you love Stargate SG-1 then you don’t want to miss this podcast. 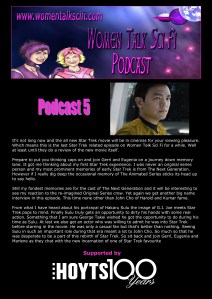 It’s not long now and the all new Star Trek movie will be in cinemas for your viewing pleasure. Which means this is the last Star Trek related episode on Women Talk Sci Fi for a while. Well at least until they do a review of the new movie itself. Prepare to put you thinking caps on and join Gerri and Eugenia on a journey down memory lane. It got me thinking about my first Star Trek experience. I was never an original series person and my most prominent memories of early Star Trek is from The Next Generation.  However if I really dig deep the occasional memory of The Animated Series sticks its head up to say hello.  Still my fondest memories are for the cast of The Next Generation and it will be interesting to see my reaction to the re-imagined Original Series crew. Yet again we get another big name interview in this episode. This time none other than John Cho of Harold and Kumar fame. From what I have heard about his portrayal of Hakaru Sulu the image of G.I. Joe meets
Trek pops to mind. Finally Sulu truly gets an opportunity to dirty his hands with some real action. Something that I am sure George Takei wished he got the opportunity to do during his time as Sulu. At last we also get an actor who was willing to admit he was into Star Trek before starring in the movie. He was only a casual fan but that’s better than nothing. Seeing Sulu in such an important role during that era meant a lot to John Cho. So much so that he was desperate to be a part of this rebirth of Star Trek. So sit back and join Gerri, Eugenia and Marlene as they chat with the new incarnation of one of Star Trek favourite characters.