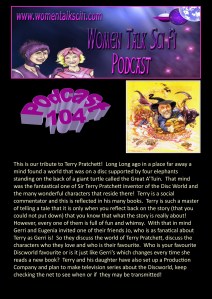 This is our tribute to Terry Pratchett! Long Long ago in a place far away a mind found a world that was on a disc supported by four elephants standing on the back of a giant turtle called the Great A’Tuin. That mind was the fantastical one of Sir Terry Pratchett inventor of the Disc World and the many wonderful characters that reside there! Terry is a social commentator and this is reflected in his many books. Terry is such a master of telling a tale that it is only when you reflect back on the story (that you could not put down) that you know that what the story is really about! However, every one of them is full of fun and whimsy. With that in mind Gerri and Eugenia invited one of their friends Jo, who is as fanatical about Terry as Gerri is! So they discuss the world of Terry Pratchett, discuss the characters who they love and who is their favourite. Who is your favourite Discworld favourite or is it just like Gerri’s which changes every time she reads a new book? Terry and his daughter have also set up a Production Company and plan to make television series about the Discworld, keep checking the net to see when or if they may be transmitted! 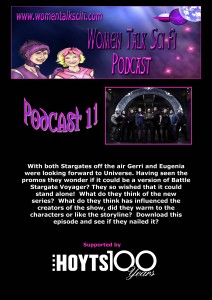 With both Star Gates off the air Gerri and Eugenia were looking forward to Universe. Having seen the promos they wonder if it could be a version of Battle Stargate Voyager? They so wished that it could stand alone! What do they think of the new series? What do they think has influenced the creators of the show, did they warm to the characters or like the story line?  Download this episode and see if they nailed it?