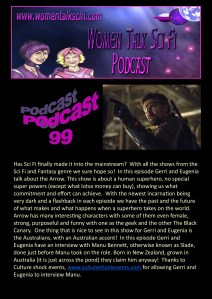 Has Sci Fi finally made it into the mainstream? With all the shows from the Sci Fi and Fantasy genre we sure hope so! In this episode Gerri and Eugenia talk about the Arrow. This show is about a human superhero, no special super powers (except what lotsa money can buy), showing us what commitment and effort can achieve. With the newest incarnation being very dark and a flashback in each episode we have the past and the future of what makes and what happens when a superhero takes on the world. Arrow has many interesting characters with some of them even female, strong, purposeful and funny with one as the geek and the other The Black Canary. One thing that is nice to see in this show for Gerri and Eugenia is the Australians, with an Australian accent! In this episode Gerri and Eugenia have an interview with Manu Bennett, otherwise known as Slade, done just before Manu took on the role. Born in New Zealand, grown in Australia (it is just across the pond) they claim him anyway! Thanks to Culture shock events, http://www.cultureshockevents.com for allowing Gerri and Eugenia to interview Manu.