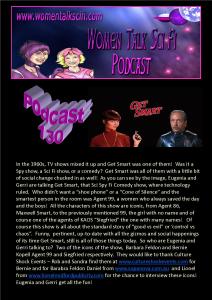 In the 1960s, TV shows mixed it up and Get Smart was one of them! Was it a Spy show, a Sci Fi show, or a comedy? Get Smart was all of them with a little bit of social change chucked in as well! As you can see by the image, Eugenia and Gerri are talking Get Smart, that Sci Spy Fi Comedy show, where technology ruled. Who didn’t want a “shoe phone” or a “Cone of Silence” and the smartest person in the room was Agent 99, a women who always saved the day and the boys! All the characters of this show are iconic, from Agent 86, Maxwell Smart, to the previously mentioned 99, the girl with no name and of course one of the agents of KAOS “Siegfried” the one with many names! Of course this show is all about the standard story of “good vs evil” or ‘control vs chaos”. Funny, pertinent, up-to-date with all the gizmos and social happenings of its time Get Smart, still is all of those things today. So who are Eugenia and Gerri talking to? Two of the icons of the show, Barbara Feldon and Bernie Kopell Agent 99 and Siegfried respectively. They would like to thank Culture Shock Events – Rob and Sandra find them at www.cultureshockevents.com for Bernie and for Barabra Feldon Daniel from www.supanova.com.au and Lionel from www.lionelmidfordpublicity.com for the chance to interview these icons! Eugenia and Gerri get all the fun! 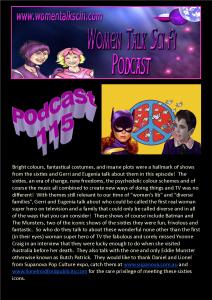 Bright colours, fantastical costumes, and insane plots were a hallmark of shows from the sixties and Gerri and Eugenia talk about them in this episode!  The sixties, an era of change, new freedoms, the psychedelic colour schemes and of course the music all combined to create new ways of doing things and TV was no different!  With themes still relevant to our time of “women’s lib” and “diverse families”, Gerri and Eugenia talk about who could be called the first real woman super hero on television and a family that could only be called diverse and in all of the ways that you can consider!  These shows of course include Batman and The Munsters, two of the iconic shows of the sixties they were fun, frivolous and fantastic.  So who do they talk to about these wonderful none other than the first (in their eyes) woman super hero of TV the fabulous and sorely missed Yvonne Craig in an interview that they were lucky enough to do when she visited Australia before her death.  They also talk with the one and only Eddie Munster otherwise known as Butch Patrick.  They would like to thank Daniel and Lionel from Supanova Pop Culture expo, catch them at http://www.supanova.com. au   and http://www.lionelmidfordpublicity.com   for the rare privilege of meeting these sixties icons.