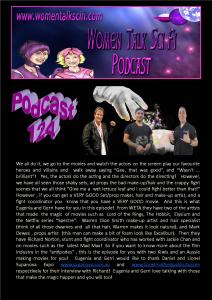 In this episode, Eugenia and Gerri talk about Buck Rogers. Buck has a long history first appearing in 1929 in the iconic Science Fiction magazine Amazing Stories. A Magazine that launched and in fact defined the genre of pulp fiction! So, why are they talking about an 85-year-old hero? Set in the future year 2419, this hero has appeared in comics, serial movies and of course television series as well, Buck has been influencing heroes since his first appearance! Eugenia and Gerri discuss how this hero has changed over the years, how the changing times have also influenced the presentation of women, and how they changed from screamers to leaders. The 1979 – 1981 “Buck Rogers in the 25th Century” television show is the one that they particularly discuss in this episode, which was on TV when little else in this genre was transmitted. As regular listener you know that Eugenia and Gerri love to interview actors from iconic television shows and that happens again in this episode and it is non other than Colonel Wilma Deering, who of course is the beautiful Erin Gray. So sit back and enjoy! Eugenia and Gerri would like to thank Scott Liston from First Contact Conventions http://www.firstcontactconventions.com.au and Darren and Jason from Gifts for the Geek http://www.giftsforthegeek.com.au for the opportunity to interview Erin.