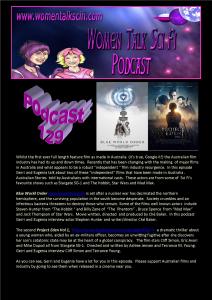 Episode 54 – The Best of the Baddies – Cliff Simon

Eugenia and Gerri go back to one of their favourites, Stargate. They talk about all the baddies that battled with Stargate Command over the years of the shows. Who were the best baddies and who needed to be just a little bit badder! Was it the Goa’uld, the Ori, the Replicators or the Wraith. They discuss the ones that they liked even though they shouldn’t. They talk about one particular baddie that they both like very much and that was Ba’al. This particular bad guy was not your typical Goa’uld System Lord. Yes, he did want to take over the Universe just like all the rest, he was ruthless and selfish and just plain bad! However, he did it with just a sparkle in his eye that you could not help thinking that if you were going to be picked on by a Goa’uld then you would be standing in front of them all call out to Ba’al “pick me, pick me”. So, sit back have a listen and then enjoy the conversation they got to have with the best baddie from Stargate, none other than Ba’al, the gorgeous Cliff Simon when they caught up with him at The Hub Productions Convention in Adelaide http://www.thehubproductions.com.