Episode 103 – There is Nothing Black or White about Gigi Edgley

Farscape, what a show? How many of you have watched this Australian show? Well, Gerri and Eugenia and are proud to say “Made in Australia”, this is a show that breaks the mould in the use of Muppets! Well not Muppets but animatronics, done so well that you actually see the characters as real and find that you invest them with feeling and reality and the show is full of fun, suspense and damn good action! The show took us a little further in the imaginations of make-up artists and their vision of what an alien would look like. We had black and white, red and blue skin, tentacles coming from the head and even a ship that was a sentient being! Jim Henson’s Creature workshop was able to create characters that were multi-layer as well as a few “nut-jobs”, action heroes and some more really, really nutjobs! In this podcast Gerri and Eugenia get to talk with one of the actors from the series none other than Gigi Edgley who played Chiana, the black and white alien who may be classed as one of the nutjobs!!! Gigi is a method actor, singer, writer and now “show-host”. Gigi now hosts Brian Henson’s show, “Jim Henson’s Creature Shop Challenge” where you get to see how animatronics are made and used in movies and TV. Gerri and Eugenia would like to thank Gigi for the interview and you can catch her at her website http://www.gigiedgley.com Facebook https://www.facebook.com/gigiedgley.fanpage?fref=ts and on twitter @GigiEdgley.

Episode 60 – Ben Browder – From Farscape to Stargate and Doctor Who 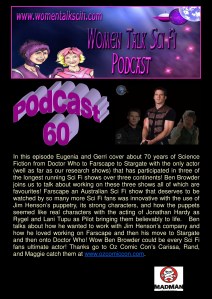 In this episode Eugenia and Gerri cover about 70 years of Science Fiction from Doctor Who to Farscape to Stargate with the only actor (well as far as our research shows) that has participated in three of the longest running Sci Fi shows over three continents! Ben Browder joins us to talk about working on these three shows all of which are favourites!  Farscape an Australian Sci Fi show that deserves to be watched by so many more Sci Fi fans was innovative with the use of Jim Henson’s puppetry, its strong characters, and how the puppets seemed like real characters with the acting of Jonathan Hardy as Rygel and Lani Tupu as Pilot bringing them believably to life. Ben talks about how he wanted to work with Jim Henson’s company and how he loved working on Farscape and then his move to Stargate and then onto Doctor Who! Wow Ben Browder could be every Sci Fi fans ultimate actor! Thanks go to Oz Comic Con’s Carissa, Rand, and Maggie catch them at http://www.ozcomiccon.com.