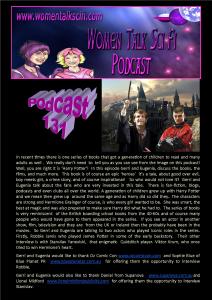 In recent times there is one series of books that got a generation of children to read and many adults as well. We really don’t need to tell you as you can see from the image on this podcast! Well, you are right it is ‘Harry Potter’! In this episode Gerri and Eugenia, discuss the books, the films, and much more. This book is of course an epic ‘heroes’it’s a tale, about good over evil, boy meets girl, a crime story, and of course inspirational! So who would not love it? Gerri and Eugenia talk about the fans who are very invested in this tale. There is fan-fiction, blogs, podcasts and even clubs all over the world. A generation of children grew up with Harry Potter and we mean then grew up around the same age and as Harry did so did they. The characters are strong and Hermione Grainger of course, is who every girl wanted to be. She was smart, the best at magic and was also prepared to make sure Harry did what he had to. The series of books is very reminiscent of the British boarding school books from the 40-60s and of course many people who would have gone to them appeared in the series. If you see an actor in another show, film, television and they are from the UK or Ireland then the probably have been in the movies. So Gerri and Eugenia are talking to two actors who played iconic roles in the series. Firstly, Robbie Jarvis who played James Potter in some of the early backstory. Their other interview is with Stansilav Yaneviski, that enigmatic Quidditch player Viktor Krum, who once tried to win Hermione’s heart.

Gerri and Eugenia would like to thank Oz Comic Con www.ozcomiccon.com and Sophie Blue of Blue Planet PR www.blueplanetpr.com.au for offering them the opportunity to interview Robbie.

Gerri and Eugenia would also like to thank Daniel from Supanova www.supanova.com.au and Lionel Midford www.lionelmidfordpublicity.com for offering them the opportunity to interview Stanislav.

In this podcast Eugenia and Gerri delve into the world of
Wizards and Magic as they discuss the phenomenon of
Harry Potter. Eugenia and Gerri discuss their favourite
characters and the impact the story has had on the
literary world and admire the mind of J.K. Rowling who
brought us Hogwarts and Quidditch. Out of the vaults they
produce an interview they conducted with Chris Rankin
who plays Percy Weasley in the films. This is their very
first interview ever and the audio is not great as it was
done for their e-zine, they had not even bought their first
“real” digital recorders. If you wish to read the transcript
of the interview click here http://www.genews-ezine.com/
interviews.html. It will take you to GE News – Women Talk
Sci Fi ezine http://www.genews-ezine.com their e-zine. Yes,
Eugenia and Gerri not only talk about Sci Fi they also write
about it as well.