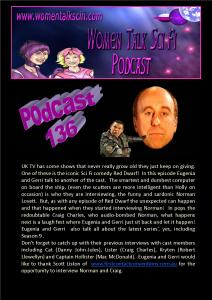 UK TV has some shows that never really grow old they just keep on giving. One of these is the iconic Sci Fi comedy Red Dwarf! In this episode Eugenia and Gerri talk to another of the cast. The smartest and dumbest computer on board the ship, (even the scutters are more intelligent than Holly on occasion) is who they are interviewing, the funny and sardonic Norman Lovett. But, as with any episode of Red Dwarf the unexpected can happen and that happened when they started interviewing Norman! In pops the redoubtable Craig Charles, who audio-bombed Norman, what happens next is a laugh fest where Eugenia and Gerri just sit back and let it happen! Eugenia and Gerri also talk all about the latest series’, yes, including Season 9 .
Don’t forget to catch up with their previous interviews with cast members including Cat (Danny John-Jules), Lister (Craig Charles), Kryten (Robert Llewellyn) and Captain Hollister (Mac McDonald). Eugenia and Gerri would like to thank Scott Liston of www.firstcontactconventions.com.au for the opportunity to interview Norman and Craig.