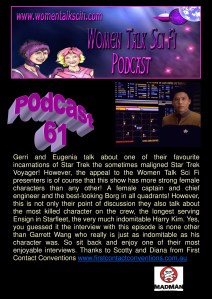 Gerri and Eugenia talk about one of their favourite incarnations of Star Trek the sometimes maligned Star Trek Voyager! However, the appeal to the Women Talk Sci Fi presenters is of course that this show has more strong female characters than any other! A female captain and chief engineer and the best-looking Borg in all quadrants! However, this is not only their point of discussion they also talk about the most killed character on the crew, the longest serving Ensign in Starfleet, the very much indomitable Harry Kim. Yes, you guessed it the interview with this episode is none other than Garrett Wang who really is just as indomitable as his character was. So sit back and enjoy one of their most enjoyable interviews. Thanks to Scotty and Diana from First Contact Conventions http://www.firstcontactconventions.com.au