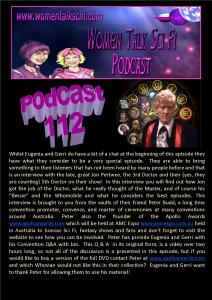 Whilst Eugenia and Gerri do have a bit of a chat at the beginning of this episode they have what they consider to be a very special episode. They are able to bring something to their listeners that has not been heard by many people before and that is an interview with the late, great Jon Pertwee, the 3rd Doctor and their (yes, they are counting) 5th Doctor on their show! In this interview you will find out how Jon got the job of the Doctor, what he really thought of the Master, and of course his “Bessie” and the Whomobile and what he considers the best episodes. This interview is brought to you from the vaults of their friend Peter Budd, a long time convention promoter, convenor, and master of ceremonies at many conventions around Australia. Peter is also the founder of the Apollo Awards http://www.apolloawards.com which will be held at AMC Expo http://www.amcexpo.com.au held in Australia to honour Sci Fi, Fantasy shows and fans and don’t forget to visit the website to see how you can be involved. Peter has provide Eugenia and Gerri with his Convention Q&A with Jon. This Q & A in its original form, is a video over two hours long, so not all of the discussion is presented in this episode, but if you would like to buy a version of the full DVD contact Peter at http://www.apolloawards.com and which Whovian would not like this in their collection? Eugenia and Gerri want to thank Peter for allowing them to use his material and what else Peter is hiding in his vault for the future! 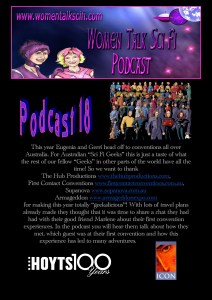 This year Eugenia and Gerri head off to conventions all over Australia. For Australian “Sci Fi Geeks” this is just a taste of what the rest of our fellow “Geeks” in other parts of the world have all the time! So we want to thank: The Hub Productions http://www.thehubproductions.com, First Contact Conventions http://www.firstcontactconventions.com.au, Supanova http://www.supanova.com.au, Armageddon http://www.armageddonexpo.com For making this year totally “geekalicious”! With lots of travel plans already made they thought that it was time to share a chat they had had with their good friend Marlene about their first convention experiences. In the podcast you will hear them talk about how they met, which guest was at their first convention and how this experience has led to many adventures.