Episode 123 – Battlestar Then and Now 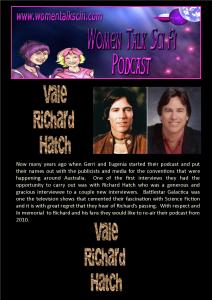 Now many years ago when Gerri and Eugenia started their podcast and put their names out with the publicists and media for the conventions that were happening around Australia. One of the first interviews they had the opportunity to carry out was with Richard Hatch who was a generous and gracious interviewee to a couple of new interviewers. Battlestar Galactica was one the television shows that cemented their fascination with Science Fiction and it is with great regret that they hear of Richard’s passing. With respect and In Memorial to Richard and his fans they would like to re-air their podcast from 2010.