That show about the girl with a “stick” and “attitude”! In this episode guess which show Gerri and Eugenia are talking about? It’s one of their favourite shows, Buffy the Vampire Slayer! They have talked about this show before, but as you know they can wax lyrical about anything! So, with that in mind they discuss the strong character growth across the seven seasons of the show and still feel that the show stands up today, yes even with the clothes and the hairstyles! So whom are they talking with in this show, the lovely funny and very talented Amber Benson, actor, author, director and producer! So, they discuss the (at the time) intriguing relationship between Willow and Tara, the shock of her Tara’s death. Tara showed strength of character and took on the role of the stabiliser for the “Scooby Gang” with the voice of reason! Amber Benson is also a big “geek” into sci fi and fantasy , comic books and more! Gerri and Eugenia would like to thank Culture Shock Events, catch them at http://www.cultureshockevents.com to see what events they have coming to a city near you.

In this episode Gerri and Eugenia look at one of what now can be considered an old favourite (yep they do have lots of favourites don’t they?). They look at one of the characters from the cast of Angel, the smart physics student, ex-slave and very brave Fred Burkle and discuss the impact her arrival had on the already formed team of demon busters. Fred, played by Amy Acker brought a softer touch to the team and with her logical mind helped ensure success in many a mission. Yes you have I am sure guessed it by now, that they were given the chance to talk with Amy Acker and yes she is just like “Fred” kind, sweet and generous. They would like to thank Daniel and Lionel from Supanova Pop Culture Expo and you can find them at http://www.supanova.com.au. Keep an eye on their site as Supanova are expanding their events in Australia.

In this episode Eugenia and Gerri discuss one of the iconic shows that made being a vampire sophisticated and sexy! Yes, it is none other than Buffy the Vampire Slayer any geek girls must watch show and who did not want to be (or be with) the slayer and her trusty friend Mr Pointy, the stake!. The story of the chosen one and all the baddies in the world from those who eat kittens to The Master Vampire to the Nerds who kill! Taking its inspiration from classic tales such as Frankenstein (remember Adam) and fairy tales (Hush) were not The Gentlemen one of the scariest villains of all time as well as Dracula (of course)? Eugenia and Gerri have the pleasure of interviewing one of Buffy’s baddest baddies none other than Glory herself, Clare Kramer. They would like to thank Daniel and Lionel from Supanova Expo http://www.supanova.com.au for their interview with Clare.

Episode 47 – We Meet the King Of Vampires – Denis O’Hare 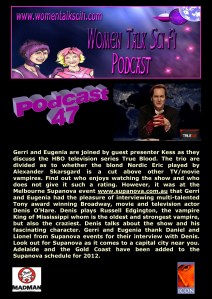 Gerri and Eugenia are joined by guest presenter Kess as they discuss the HBO television series True Blood. The trio are divided as to whether the blond Nordic Eric played by Alexander Skarsgard is a cut above other TV/movie vampires. Find out who enjoys watching the show and who does not give it such a rating. However, it was at the Melbourne Supanova event http://www.supanova.com.au that Gerri and Eugenia had the pleasure of interviewing multi-talented Tony award winning Broadway, movie and television actor Denis O’Hare. Denis plays Russell Edgington, the vampire King of Mississippi whom is the oldest and strongest vampire, but also the craziest. Denis talks about the show and his fascinating character. Gerri and Eugenia thank Daniel and Lionel from Supanova events for their interview with Denis.  Look out for Supanova as it comes to a capital city near you. Adelaide and the Gold Coast have been added to the Supanova schedule for 2012.

In this podcast Gerri and Eugenia talk about Buffy the Vampire Slayer, one of the most innovative shows in the Sci Fi/Fantasy genre! They discuss the impact the show had on the folklore of the supernatural and how refreshing it was to see this taken from the perspective of not only a female but of a teenage female at that! They discuss the impact Joss Whedon has had on the revival and the sexing up of Vampires! Gerri and Eugenia discuss their favourite episodes and talk about memorable characters that made up seven years of the show. You also get to a listen to an interview they did at a Supanova Convention with Larry Bagby, who of course played “Larry the Jock” in Buffy. One of those faces that you see all the time in the background. Larry is also a country singer with one of his songs famous for its use in an episode of Cold Case. Again thanks to Daniel and Lionel from
http://www.supanova.com.au and visit Larry’s site at http://www.larrybagby.com to hear more of his music.

Episode 22 – Full Moon or Twilight Brings Out the Werewolf

Ever wondered about the effect the full moon has on
people? In this podcast Eugenia and Gerri discuss the
werewolf. Is this creature just a hairy savage or a
misunderstood tortured soul? Find out what Gerri and
Eugenia think about the way werewolves have been
portrayed in movies and TV from 1935 to the Twilight
movies. At Supanova Expo http://www.supanova.com.au the
girls caught up with Alex Meraz who plays one of the
Twilight werewolves. He plays Paul the moody, dark one in
Twilight: New Moon and Twilight: Eclipse. They also spoke
to Bret Kennedy and Anthony Edwards
http://www.thedarklurkingmovie.com who have produced and
starred in an all Australian Sci Fi movie called The Dark
Lurking. Catch it at a Supanova Pop Culture Expo near
you.

Gerri and Eugenia discuss what they think about Vampires and how they have been portrayed on TV and in the movies. They discuss shows like, Tru Blood, The Munsters, Moonlight and of course Buffy and Angel. They recall the Hammer Horror movies and how the Vampire image has changed from the stereotypical cape and peaked hair to the more cool dude dressed Vampires of today. Join them as whip through Vampire history from Nosferatu to Edward. What kinda Vampires do you crave?  Send them your comments about the Twilight movies and why you like or dislike the Vampires in this franchise! Mail them at contact@womentalkscifi.com