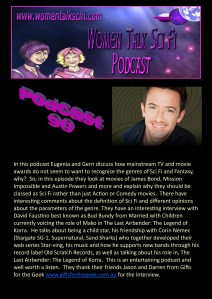 In this podcast Eugenia and Gerri discuss how mainstream TV and movie awards do not seem to want to recognise the genres of Sci Fi and Fantasy, why? So; in this episode they look at movies of James Bond, Mission Impossible and Austin Powers and more and explain why they should be classed as Sci Fi rather than just Action or Comedy movies. There have interesting comments about the definition of Sci Fi and different opinions about the parameters of the genre. They have an interesting interview with David Faustino best known as Bud Bundy from Married with Children currently voicing the role of Mako in The Last Airbender: The Legend of Korra. He talks about being a child star, his friendship with Corin Nemec (Stargate SG-1, Supernatural, Sand Sharks) who together developed their web series Star-ving, his music and how he supports new bands through his record label Old Scratch Records, as well as talking about his role in, The Last Airbender: The Legend of Korra. This is an entertaining podcast and well worth a listen. They thank their friends Jason and Darren from Gifts for the Geek http://www.giftsforthegeek.com.au for the interview.