Episode 108 – The Many Faces of Star Trek – Plakson – Sheppard 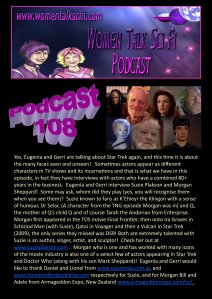 Yes, Eugenia and Gerri are talking about Star Trek again, and this time it is about the many faces seen and unseen! Sometimes actors appear as different characters in TV shows and its incarnations and that is what we have in this episode, in fact they have interviews with actors who have a combined 80+ years in the business. Eugenia and Gerri interview Suzie Plakson and Morgan Sheppard! Some may ask, whom did they play (yes, you will recognise them when you see them)? Suzie known to fans as K’Ehleyr the Klingon with a sense of humour, Dr Selar, (A character from the TNG episode Morgan was in) and Q, the mother of Q’s child Q and of course Tarah the Andorian from Enterprise. Morgan first appeared in the TOS movie Final Frontier, then onto Ira Graves in Schiziod Man (with Susie), Qatai in Voyager and then a Vulcan in Star Trek (2009), the only series they missed was DS9! Both are extremely talented with Suzie is an author, singer, artist, and sculptor! Check her out at http://www.suzieplakson.com . Morgan who is one and has worked with many icons of the movie industry is also one of a select few of actors appearing in Star Trek and Doctor Who (along with his son Mark Sheppard)! Eugenia and Gerri would like to thank Daniel and Lionel from http://www.supanova.com.au and http://www.lionelmidfordpublicity.com respectively for Suzie, and for Morgan Bill and Adele from Armageddon Expo, New Zealand http://www.armageddonexpo.com/nz/ .