Episode 46 – Space Can Be A Funny Place – Michael Winslow 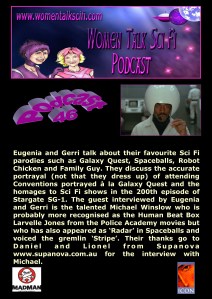 Eugenia and Gerri talk about their favourite Sci Fi parodies such as Galaxy Quest, Spaceballs, Robot Chicken and Family Guy. They discuss the accurate portrayal (not that they dress up) of attending Conventions portrayed à la Galaxy Quest and the homages to Sci Fi shows in the 200th episode of Stargate SG-1. The guest interviewed by Eugenia and Gerri is the talented Michael Winslow who is probably more recognised as the Human Beat Box Larvelle Jones from the Police Academy movies but who has also appeared as ‘Radar’ in Spaceballs and voiced the gremlin ‘Stripe’. Their thanks go to Daniel and Lionel from Supanova http://www.supanova.com.au for the interview with Michael.