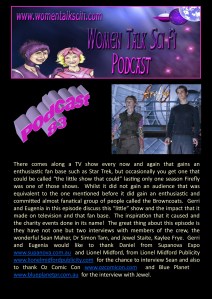 There comes along a TV show every now and again that gains an enthusiastic fan base such as Star Trek, but occasionally you get one that could be called “the little show that could” lasting only one season Firefly was one of those shows. Whilst it did not gain an audience that was equivalent to the one mentioned before it did gain an enthusiastic and committed almost fanatical group of people called the Browncoats. Gerri and Eugenia in this episode discuss this “little” show and the impact that it made on television and that fan base. The inspiration that it caused and the charity events done in its name! The great thing about this episode is they have not one but two interviews with members of the crew, the wonderful Sean Maher, Dr Simon Tam, and Jewel Staite, Kaylee Frye. Gerri
and Eugenia would like to thank Daniel from Supanova Expo http://www.supanova.com.au and Lionel Midford, from Lionel Midford Publicity http://www.lionelmidfordpublicity.com for the chance to interview Sean and also to thank Oz Comic Con http://www.ozcomicon.com and Blue Planet PR http://www.blueplanetpr.com.au for the interview with Jewel.