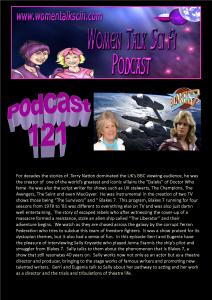 For decades the stories of Terry Nation dominated the UK’s BBC viewing audience, he was the creator of one of the world’s greatest and iconic villains the “Daleks” of Doctor Who fame He was also the script writer for shows such as UK stalwarts, The Champions, The Avengers, The Saint and even MacGyver. He was instrumental in the creation of two TV shows those being “The Survivors” and “Blakes 7”. This program, Blakes 7 running for four seasons from 1978 to ’81 was different to everything else on TV and was also just damn well entertaining. The story of escaped rebels who after witnessing the cover-up of a massacre formed a resistance, stole an alien ship called “The Liberator” and their adventure begins. We watch as they are chased across the galaxy by the corrupt Terran Federation who tries to subdue this team of freedom fighters. It was a show praised for its dystopian themes, but it also had a sense of fun. In this episode Gerri and Eugenia have the pleasure of interviewing Sally Knyvette who played Jenna Stannis the ship’s pilot and smuggler from Blakes 7. Sally talks to them about the phenomenon that is Blakes 7, a show that still resonates 40 years on. Sally works now not only as an actor but as a theatre director and producer, bringing to the stage works of famous writers and promoting new talented writers. Gerri and Eugenia talk to Sally about her pathway to acting and her work as a director and the trials and tribulations of theatre life.