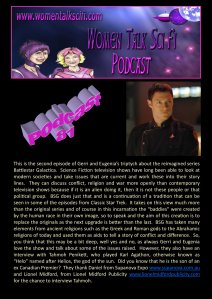 This is the second episode of Gerri and Eugenia’s triptych about the reimagined series Battlestar Galactica. Science Fiction television shows have long been able to look at modern societies and take issues that are current and work these into their story lines. They can discuss conflict, religion and war more openly than contemporary television shows because if it is an alien doing it, then it is not these people or that political group. BSG does just that and is a continuation of a tradition that can be seen in some of the episodes from Classic Star Trek. It takes on this view much more than the original series and of course in this incarnation the “baddies” were created by the human race in their own image, so to speak and the aim of this creation is to replace the originals as the next upgrade is better than the last. BSG has taken many elements from ancient religions such as the Greek and Roman gods to the Abrahamic religions of today and used them as aids to tell a story of conflict and difference. So, you think that this may be a bit deep, well yes and no, as always Gerri and Eugenia love the show and talk about some of the issues raised. However, they also have an interview with Tahmoh Penikett, who played Karl Agathon, otherwise known as “Helo” named after Helios, the god of the sun. Did you know that he is the son of an ex Canadian Premier? They thank Daniel from Supanova Expo http://www.supanova.com.au and Lionel Midford, from Lionel Midford Publicity http://www.lionelmidfordpublicity.com for the chance to interview Tahmoh.

This entry was posted on 21/01/2016 by Women Talk Sci Fi. It was filed under Celebrities Interviews, Podcast, Sci Fi, Television and was tagged with Battlestar Galactica, BSG, Helo, Tahmoh Penikett.