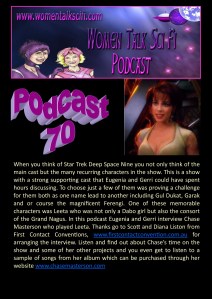 When you think of Star Trek Deep Space Nine you not only think of the main cast but the many recurring characters in the show. This is a show with a strong supporting cast that Eugenia and Gerri could have spent hours discussing. To choose just a few of them was proving a challenge for them both as one name lead to another including Gul Dukat, Garak and or course the magnificent Ferengi. One of these memorable characters was Leeta who was not only a Dabo girl but also the consort of the Grand Nagus. In this podcast Eugenia and Gerri interview Chase Masterson who played Leeta. Thanks go to Scott and Diana Liston from First Contact Conventions, http://www.firstcontactconvention.com.au for arranging the interview. Listen and find out about Chase’s time on the show and some of her other projects and you even get to listen to a sample of songs from her album which can be purchased through her website http://www.chasemasterson.com