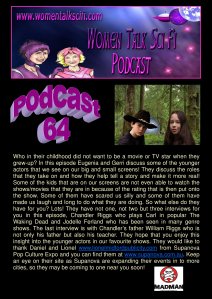 Who in their childhood did not want to be a movie or TV star when they grew-up? In this episode Eugenia and Gerri discuss some of the younger actors that we see on our big and small screens! They discuss the roles that they take on and how they help tell a story and make it more real! Some of the kids that are on our screens are not even able to watch the shows/movies that they are in because of the rating that is then put onto the show. Some of them have scared us silly and some of them have made us laugh and long to do what they are doing. So what else do they have for you? Lots! They have not one, not two but three interviews for you in this episode, Chandler Riggs who plays Carl in popular The Waking Dead and Jodelle Ferland who has been seen in many genre shows. The last interview is with Chandler’s father William Riggs who is not only his father but also his teacher. They hope that you enjoy this insight into the younger actors in our favourite shows. They would like to thank Daniel and Lionel http://www.lionelmidfordpublicity.com from Supanova Pop Culture Expo and you can find them at http://www.supanova.com.au. Keep an eye on their site as Supanova are expanding their events in to more cities, so they may be coming to one near you soon!

This entry was posted on 21/01/2016 by Women Talk Sci Fi. It was filed under Celebrities Interviews, Fantasy, Podcast, Television and was tagged with Chandler Riggs, Horror, Jodelle Ferland, Stargate, Stargate SG1, The Walking Dead, Zombies.